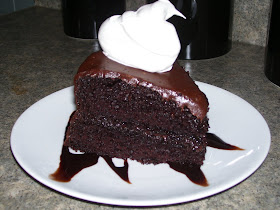 According to food lore the black magic cake originated as a recipe from Hershey's. I have been using a different black magic cake for the past few years though and had never looked into another one. When I wanted to make this cake I didn't have access to my regular recipes so I decided to search the net. I found the original Hershey's recipe and decided to give it a try. I will now be using the Hershey's recipe exclusively. The old recipe was great but this was fabulous. The cake was so moist and full of flavor. It was perfect.

As far as the frosting goes I searched for a chocolate frosting recipe that also included the coffee flavor to match with my cake. I was a little unsure of using a chocolate frosting on this cake as I usually use a white frosting to contrast the flavor of the cake but I felt a little daring yesterday. When I made the frosting it ended up very thin and I had thought it was going to end badly. I even thought of throwing it away and trying a different recipe. However, the taste was good and I was not feeling motivated to start over.

I ended up using the frosting as more of a drizzle than an actual frosting. After sitting for awhile it did firm up and had I waited to frost the cake perhaps I could have spread it. Actually in the end I was pleased with the drizzle effect. I think if this had spread like a regular frosting it would have been too much. The frosting provided just enough flavor without being too overpowering. It also seemed to seal in the moisture of the cake. There were some tiny bubbles in the frosting that popped once the frosting set so the cake looks kind of spotted. I think if I would have let the frosting sit for a minute or so after mixing I could have avoided this problem. When I served the cake I put a dollop of whip cream on the top for a little contrast. 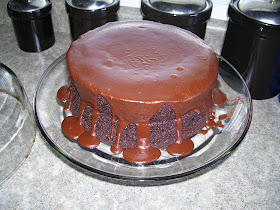 3. Bake 30 to 35 minutes for round pans, 35 to 40 minutes for rectangular pan or until wooden pick inserted in center comes out clean. Cool 10 minutes; remove from pans to wire racks. Cool completely. Frost as desired. Yields 10 to 12 servings.

* To sour milk: Use 1 tablespoon white vinegar plus milk to equal 1 cup.

Directions:
In a large bowl, sift together the cocoa and the sugar. Add the boiling coffee and melted butter, then add the vanilla extract. Beat until smooth and thick enough to spread.
The Neibauers at 9:06 AM